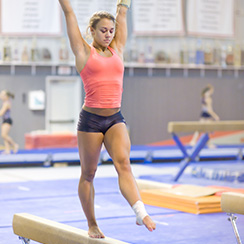 
To enable any person to participate in gymnastics and experience competition, skilled and ready; to instill the development of comradeship, social skills and the appreciation and value of physical fitness.


To provide opportunities to participate or compete at recreational, pre-competitive and competitive levels.

Lacey returned to Gymtastiks in 2010 after a short absence. Lacey started with gymnastic in 1988 and was an athlete competing at Provincial Class 4.

Jamie returned to Gymtastiks in 2010 after a short absence. Jamie started with gymnastics in 1987 and was an athlete competing at Provincial Class 2 level.

Barb returned to Gymtastiks after a 12 year absence and has been involved in gymnastics since 1976 as a coach and club administrator.